You have to love a good neighbor. I have one that is unbelievably considerate and friendly. Every year at Christmas time she buys me a cup of coffee, or about 20 cups with a $100 Starbucks Gift Card. And for a few weeks in the year I get a major dose of caffeine.

This has gone on for better than five years and every Christmas I get a Starbucks Gift Card. The last couple of years though, there was cause to question if the card was being liberated of its value. Unfortunately, getting and saving receipts only works if they don’t eventually make it to the trash bin.

This year there was greater cause to question if the card actually returned its value. Through the corner of my eye, I suspected a Starbucks cashier swiped the card twice on its last use. So, I decided to register the card and see if Starbucks listed transactions online.

Starbucks Online Registration had a mandatory requirement that included a personal mailing address. Most find such invasive mandates offensive but this being a “Gift Card”, some may find this as rude as Starbucks “Foam-for-Coffee Swap” tactics.

In the Starbucks case, they market and price a 16oz cup of coffee but provide twelve (12) or less ounces at the point of sale. Mandating someone who received a gift card as a “gift” submit personal information is designed for one purpose only. Starbucks uses these details to inundate recipients with sales and marketing material.

Subsequent review of transactions for this particular card on February 8th , 2017 revealed 12 transactions totaling $49.80. On February 21, 2017 Starbucks’ dashboard showed only 11 transactions for a total of $45.85. Remaining balances still total only $8.30 in contrast to the $54.15 we get by subtracting Transactions Listed from the Original Balance.

In reaching out to Starbucks, the following message was sent via a Customer Service link.

Transaction History appears to be missing transactions and/or balances on this card. This card was purchased with an original balance of $100. As of (1/15/2017 11:21 AM) the card shows a balance of only $8.30 and transactions totaling only $49.80. Can you please forward a complete listing of all transactions on the card that includes the time and location of each transaction?

After a few niceties, the response from Starbucks Customer Service read in part;

“In order to best assist you, we would like the opportunity to speak with you over the phone.”

Upon asking the same question on the phone, the Representative, immediately began to manually read-out the transactions starting in December of 2016. It took several request presented in different ways by altering the sentence structure but finally, the Starbucks Customer Service Representative verified she could not send a ledger of the account transactions.

We did go back and forth a few times and she even raised questions regarding transactions made after or at closing hours. But the reason given as to why she could not forward a listing of transactions was, “Because it is information already on-line”. The limit of 90 days she quoted several times did not apply.

In explaining the information was not available online and what was posted online did not reconcile, she again insisted she was trying to provide a complete list. In the electronic age of internet and any-where, any-time data storage, we might think “manually” over the phone is an archaic method.

So, I opened excel and let her read off each transaction including the date, time and amount. The only things missing are the location of the Starbucks stores and the name of cashier entering the transaction. And again, the numbers do not reconcile. A balance shown on-line and on the last receipt as $8.30 should read $13.55. That’s a negative difference of $5.25 – before we get to any stealth transactions.

Stealth transactions are those made at the time of day when Starbucks stores are either closed or closing. Most people may never “buy” a coffee at ten o’clock in the evening. Personally, I’ll not say that because there are times when I’ve been writing or playing with code and not concerned with the time or getting up in the morning. Still, pulling myself away from the computer at that hour takes more than a coffee.

Combined with the missing $5.25 (which appears as a large hot drink with a $1.00 (25%) tip), time of the transactions and the absence of location to verify if a store was actually open, they’re suspicious sales. All the Starbucks stores in locations nearby close at either 9PM or 10PM and it’s not been unusual to see at least one of them close at 8PM on occasion.

The last sale listed coincides with the last time the card was used (pending verification). Receipts were saved noting the time when it was suspected the cashier may have ran the card twice. Running into the abuse of Gift recipients, missing transactions and missing funds was by chance.

The Starbucks Customer Service Representative replaced the missing funds ($5.25) saying nothing about the missing transactions online and only suggesting some Starbucks are open 24 hours a day in defense of time questioned transactions.

Considering the history of experiences coalescing around this latest card, all Starbucks Gift Card users should save, log and reconcile paper receipts against amounts paid for these cards. It will be even more difficult to reconcile mobile payment transactions against actual purchases when only electronic receipts are available.

Starbucks list the size of their drinks alongside prices posted overhead in every location. The basic Starbucks drink sizes include Tall [12 fl. oz.], Grande [16 fl. oz.] and Venti [20 fl. oz.].

I use to order the Tall [12 fl. oz.] until its price exceeded $3.00 for one simple reason. I wasn’t going to be induced to drop $0.95 cents in that incessant tip container. Besides, the value proposition changed significantly with that price hike. So I switched to Grande only to be faced with a $0.20 cent increase soon thereafter.

But this latest hike of $0.10 to $0.30 cents per coffee in the summer of 2016 has a twisted sister. More foam (steamed milk)! Not just here and there, at one location or another. Nearly every Starbucks location reduces the amount of milk in the Latte’.

And, they’re masking it with foam. In fact, a 16oz. drink priced at $3.95 has included less than 12oz of coffee. (see photographs) You can tell by the weight of your drink. A difference of 4oz of milk is equal to a quarter (25%) of the entire weight (and stated size) of the drink which should weigh 1.08 pounds.

In dollar terms, 12oz of coffee at the Starbucks’ retail value of $3.95 for a 16oz drink would only be valued at $2.89. Starbucks is making an extra $1.06 by masking the amount of coffee with foam. And, instead of getting 8 drinks from a single gallon of milk, they get nearly 11 drinks increasing profits by $10.76 per gallon of milk to $42.27 on raw materials 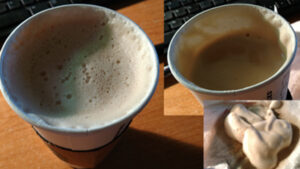 that generally generates $31.60 in revenue for Grande sized drinks.

The Grande cup, a 16oz drink has an actual capacity for 18oz of fluid leaving room even with a little foam. But the order is always the same; “Latte, No Foam”! That has never changed, not in its delivery and not in my New York accent.

The photographs suggest many Starbucks “Barista’s” don’t understand what “No Foam” means! These Starbuck drinks are all from one of seven Starbucks locations – all but one within a five square mile radius. On December 25, 2016, a Barista responded to the request for “No Foam” with, “Latte’s do not have foam”.

Whether you’re leaving the change or dropping a “fin” ($5) – which doing so today is considered a tip – it should be considered entrapment! At the point of payment, customers have yet to see or be guaranteed any level of service other than the friendly service and smile we all expect from retail businesses.

Taking advantage of that friendly gesture by reducing the amount of coffee in your cup is as rude as putting a change jar out and “expecting” a tip for doing nothing more than “taking your order, accepting payment and making change while we stand at a counter”. Sometimes for fifteen minutes! A personal interaction lasting no more than 30 seconds if, you know what you’re ordering! 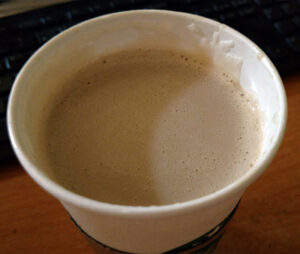 Starbucks Corporation, a $19.16 Billion (2015 annual) business is by the standard of Democrat Voters “a big business”. It had a hefty Net Income of 14.4% in 2015 that comes to $2.76 Billion for the year. Corporate big dogs publically side with the character and make-up of Democrat Politicians and supported the Hillary Clinton campaign financially in the 2016 Presidential Campaign. So, they’re no stranger to smoke screens and bait-n-switch.