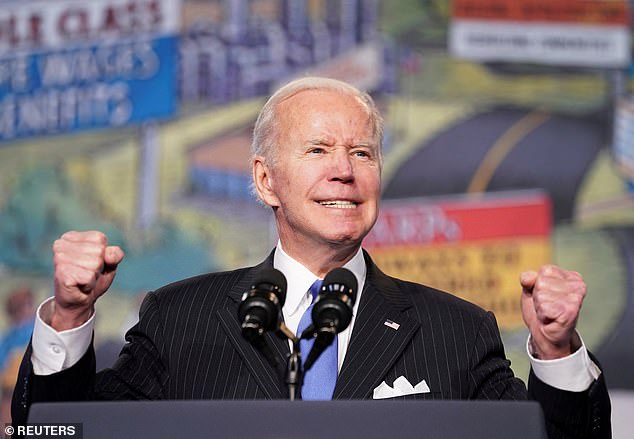 ‘If I gotta go to war, I’m going with you guys’: Biden tells union members the Ukraine war could go on for a long time and would fight alongside them in speech slamming ‘major war crimes’ in Bucha

President Joe Biden told union members in Washington Wednesday that the war in Ukraine could go on ‘a long time,’ as he recounted some of the horrors being uncovered in Bucha amid Russia‘s invasion.

‘This war can continue for a long time, but the United States will continue to stand with Ukraine and Ukrainian people in the fight for freedom,’ Biden told the North America’s Building Trades Unions (NABTU) Legislative Conference.

‘And I just want you to know that – and by the way, if I got to go to war, I’m going to you guys,’ he said, drawing cheers from the union crowd.

Biden also described some of the chilling details to emerge from Bucha and other cities and towns where Russians forces have been forced to pull back amid defensive actions by Ukrainians.

He described images of civilians ‘hands tied behind the backs, civilians executed in cold blood, bodies dumped into mass graves. Sense of brutality and humanity left for all the world to see, unapologetically. There’s nothing less happening than major war crimes,’ Biden said.

‘This war can continue for a long time, but the United States will continue to stand with Ukraine and Ukrainian people in the fight for freedom,’ President Joe Biden told union members on Wednesday

He said responsible nations ‘have to come together to hold these perpetrators accountable.’

Then, Biden described a new round of punishing sanctions meant to ‘keep raising economic costs and ratchet up the pain’ for Russian President Vladimir Putin.

He said actions to date were predicted to shrink Russia’s Gross Domestic Product by double digits this year, while the US has cut Russia off from critical technology.

He also touted sanctions that go after Russian ‘elites’ and their families – without mentioning that some new sanctions hit Putin’s two adult daughters. 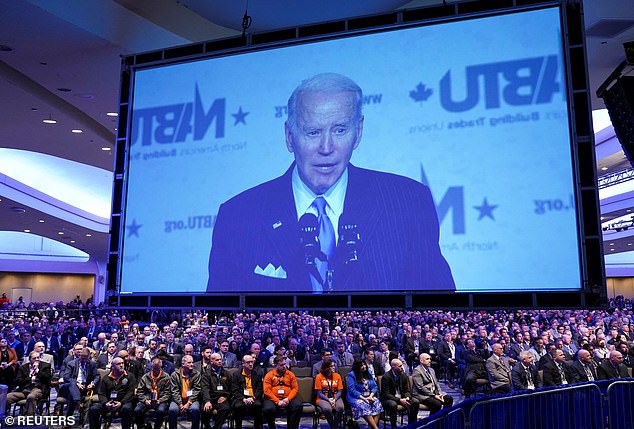 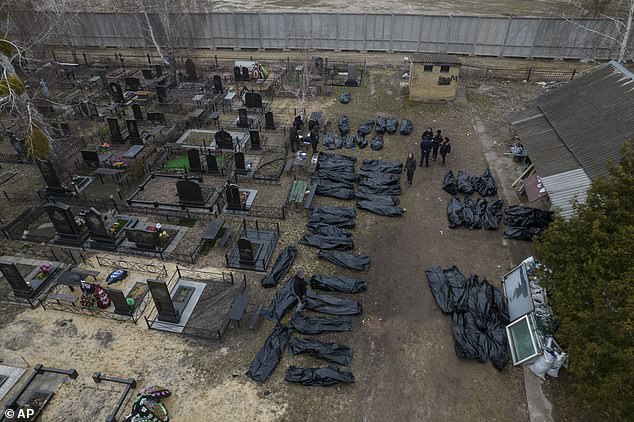 Corpses of civilians killed in Bucha are laid out in the cemetery before being transported to the morgue, on the outskirts of Kyiv, Ukraine, Wednesday, April 6, 2022 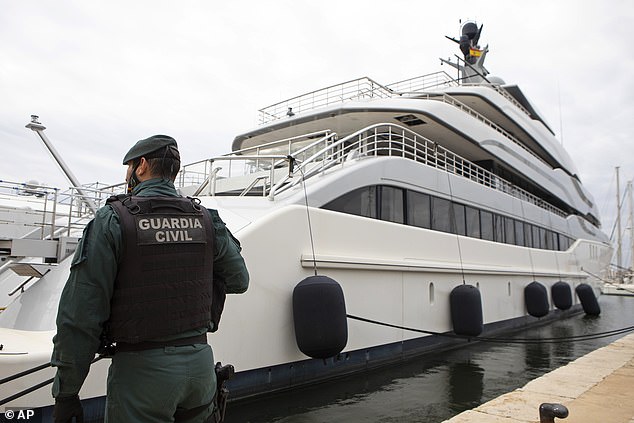 ‘Think about the incredible amounts of money these oligarchs have stolen,’ said Biden bringing up seized yachts. U.S. federal agents and Spain’s Civil Guard are searching the yacht owned by a Russian oligarch Viktor Vekselberg, which was seized Monday

‘You see these yachts where they’re being picked up? Think about the incredible amounts of money these oligarchs have stolen. These yachts are hundreds, millions and millions of dollars.

‘Look, these oligarchs, their family members are not allowed to hold onto their wealth in Europe and the United States and keep these yachts worth hundreds of millions of dollars, their luxury vacation homes, while children in Ukraine are being killed, displaced from their homes every single day,’ Biden said.

The Biden administration has sanctioned Vladimir Putin’s two eldest daughters as part of a new wave of crushing economic measures on the Kremlin in the aftermath of the atrocities against Ukrainian civilians in Bucha.

The pressure campaign comes on top of a series of sets of economic sanctions that U.S. officials say have knocked back years of growth in the Russian economy and will force Putin’s cronies to live like they did in the Soviet Union in the 1980s.

Vorontsova and Tikhonova are the children of Putin and his first wife, Lyudmila Putina, a former Aeroflat flight attendant.  The Kremlin announced she and Putin were divorcing in 2013.

‘We have we have reason to believe that many of his cronies and the oligarchs hide their wealth – hide their assets with family members that place their assets and their wealth in the US financial system,’ a senior administration official told reporters on Wednesday. ‘We believe that many of Putin’s assets are hidden with family members and that’s why we’re targeting them.’

The administration announced the rollout of sanctions this morning. The move follows Ukrainian President Volodymyr Zelensky’s chilling speech to the UN Security Council about killings of Ukrainian civilians who have been found in the street, shot with their arms bound behind their backs. 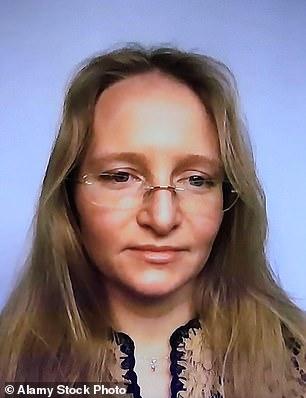 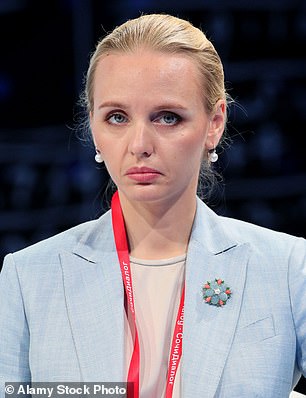 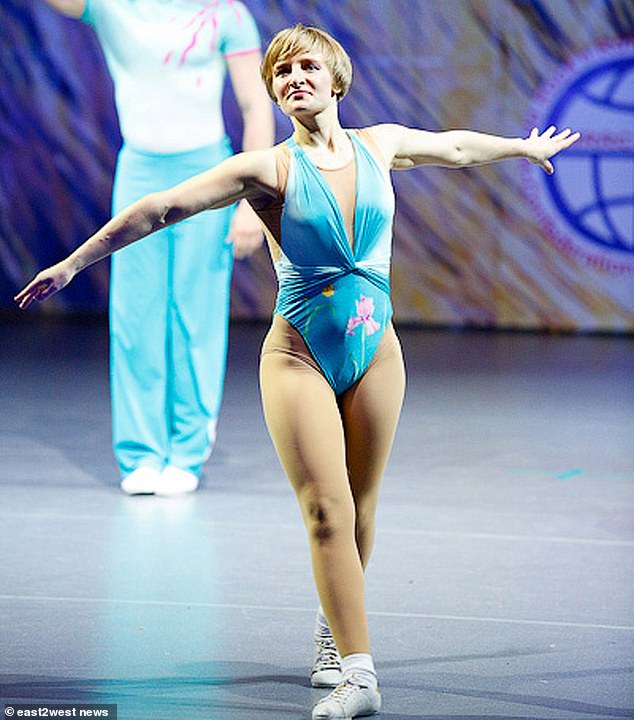 Tikhonova is a gymnast was was married to billionaire Kirill Shamalov, who Reuters reported was a senior shareholder in Bank Rossiya

Officials are already seeking to get at Putin by sanctioning oligarchs, and seizing trophy properties – including the seizure days ago of Tango, a 254-foot luxury yacht owned by oligarch and Putin friend Viktor Vekselberg.

The U.S. also is imposing full blocking sanctions on Sberbank, Russia’s largest bank. The senior administration official called it the ‘main artery in the Russian financial system,’ handling lending for about one third of its assets, totaling $500 billion.

The administration is also slapping sanctions on Alfa-Bank, it’s largest privately-owned bank and the fourth-largest overall.

The sanctions mean that any transaction with any currency involving a U.S. person or institution is prohibited, and any assets that come in contact with the U.S. financial system are frozen. The administration expects other nations to follow on with the U.S. sanctions.

‘This is the most severe action we can take in terms of financial measures,’ said the official.

Putin keeps a notoriously tight lid on his family life.

Maria Vorontsova, 36, was born when the Russian president was a KGB spy. She is a doctor of Endocrinology and is a top researcher at a medical facility in Russia, specializing in rare childhood genetic diseases.

Tikhonova is a gymnast and was married to billionaire Kirill Shamalov, who Reuters reported was a senior shareholder in Bank Rossiya. They divorced in 2018.

The 2015 report estimated their joint holdings at $2 billion, with a villa in Biarritz, France.   She holds a senior role at Moscow State University, and has inked documents for development projects for the school.

Shamalov is believed to have fled Russian sanctions misery and headed to Dubai with the daughter of an FSB general, Anastasia Zadorina.

The sanctions also will hit Russian foreign Minister Lavrov’s wife and daughter, members of Russia’s Security Council, including former President and Prime Minister of Russia Dmitry Medvedev – who was once seen years ago as a potential reformer – and Prime Minister Mikhail Mishustin.

Lavrov has been a key mouthpiece justifying Russia’s invasion on the world stage. His daughter is Ekaterina, 40, who has been posted as a diplomat in the U.S. His ‘step-daughter’ Polina Kovaleva, 26, owns a $5 million luxury apartment in London and has previously come under UK sanctions. She is the daughter of Lavrov’s alleged mistress, Svetlana Polyakova. 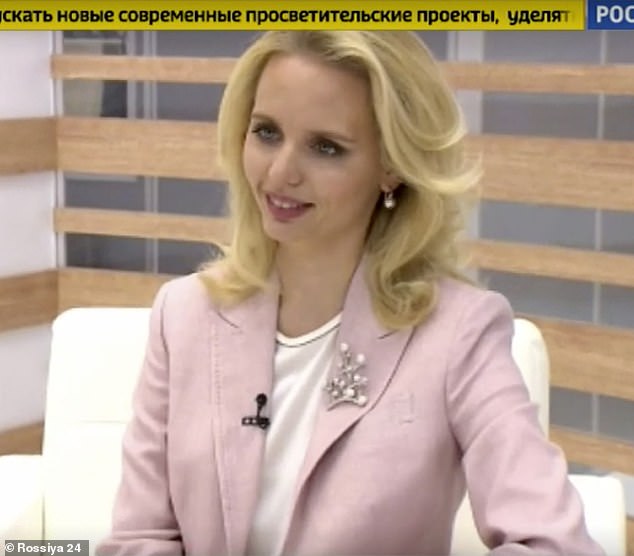 Maria Vorontsova, 36, was born when the Russian president was a KGB spy. She is a doctor of Endocrinology and is a top researcher at a medical facility in Russia, specializing in rare childhood genetic diseases 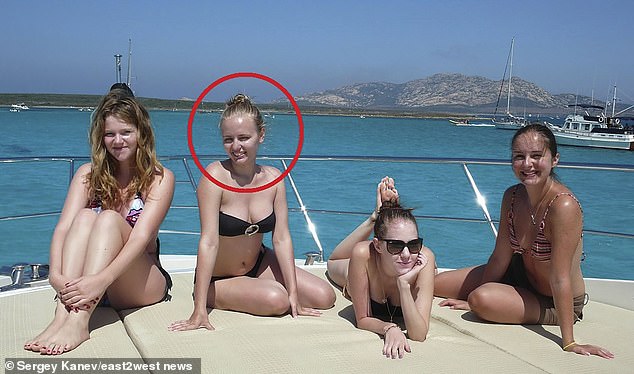 Maria is seen on a yacht when she was younger. The US have hit her with sanctions because they believe she has assets in America 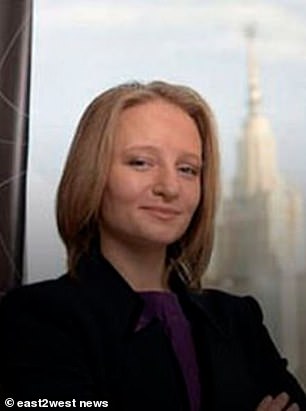 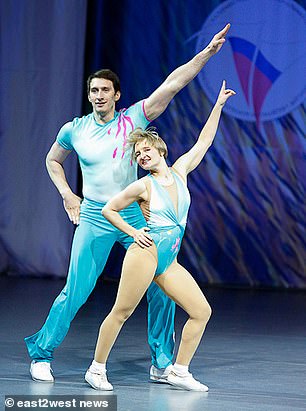 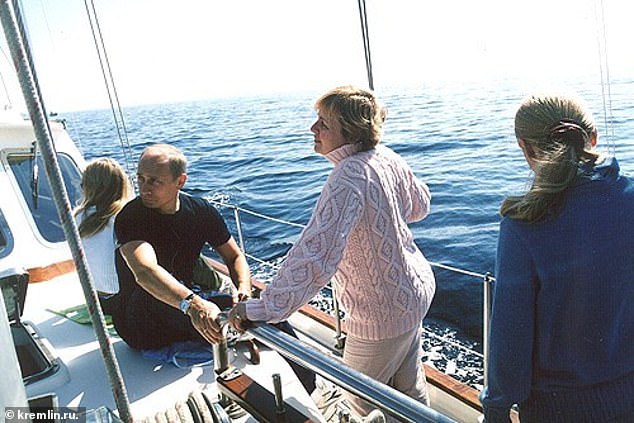 The Wall Street Journal reported that US and EU sanctions would go after Putin’s daughters, without certainty about which family members would come under sanction.

The Biden administration has charged a Russian oligarch with violating U.S. government sanctions and has disrupted a cybercrime operation launched by a Russian military intelligence agency, officials said Wednesday.

The indictment against Konstantin Malofeyev, a Russian media baron and founder of Russian Orthodox news channel, Tsargrad TV, is the first of an oligarch since the Russian invasion in February. The case accuses him of evading Treasury Department sanctions resulting from his financing of Russians promoting separatism in Crimea.

The action came as the Justice Department said it was accelerating efforts to track down illicit Russian assets and as U.S. prosecutors helped European counterparts gather evidence on potential war crimes committed by Russia during its war on Ukraine. FBI and Justice Department officials announced the moves as the U.S. separately revealed sanctions against the two adult daughters of Russian President Vladimir Putin.

‘We have our eyes on every dollar and jet. We have our eyes on every piece of art and real estate, purchased with dirty money and on every bitcoin wallet filled with proceeds of theft, and other crimes,’ Deputy Attorney General Lisa Monaco said. ‘Together with our partners around the world, our goal is to ensure that sanctioned Russian oligarchs and cyber criminals will not find safe haven.’

Though sanctions bar U.S. citizens from working for or doing business with him, Malofeyev hired an American television producer to work for him in networks in Russia and Greece and tried to buy a television network in Bulgaria, prosecutors said. Jack Hanick, a former CNBC and Fox News employee, was arrested last month for his work as a television producer for Malofeyev.

The Justice Department also announced that it had taken down a botnet – a network of hijacked computers typically used for malicious activity – that was controlled by the Russian military intelligence agency known as the GRU. The botnet was dismantled before it could cause any damage, said FBI Director Christopher Wray.

Page Six reported in March that Putin’s mistress Alina Kabaeva was alleged to be in hiding in Switzerland with the couple’s four young children – information that the Kremlin has not confirmed.

Kabaeva is a former Olympic Gold medalist in rhythmic gymnastics. But the administration confirmed it was Putin’s daughters with Lyudmila Putina who would be sanctioned.

Biden said Monday he was seeking additional sanctions, as reports came in about atrocities in Bucha.

‘You may remember I was criticized for calling Putin a war criminal,’ he said. ‘Well, the truth of the matter, you saw what happened in Bucha. This warrants him — he is a war criminal.’

‘Most estimates are the Russian economy is now, you know, on track to contract by 10 to 15% over the course of this year, which would be which would be historic,’ said White House economic official Brian Deese at a Christian Science Monitor breakfast with reporters Wednesday.

‘If you track weekly inflation in Russia for the last four weeks, it’s been running at roughly 2% a week. So we’ve all gotten used to monthly inflation data, but 2% a week is like roughly 200% a year,’ Deese said. ‘We don’t expect there to be 200% inflation in Russia because we expect that to level off.’ But he added that is indicative of the ‘extent of the economic challenge that’s operating on the ground in Russia.’

The sanctions are meant in part to undue the ‘social contract’ that Putin has with the Russian people, offering stability and financial security in exchange for his unrivaled power, the administration official said.

‘The sad reality is Putin’s war will make it harder for Russians to travel abroad, means their debit cards may not work. They may only have the option to buy knockoff phones, and knock off clothes. The shelves of stores may be empty. The reality is the country’s economic and financial, and technological isolation and at this rate it will go back to Soviet-style standards from the 1980s.’

The sanctions announcement came on a day when Attorney General Merrick Garland announced administration has charged a Russian oligarch with violating U.S. government sanctions and has disrupted .

‘Our goal is to ensure that sanctioned Russian oligarchs and cyber criminals will not find safe haven,’ she added.

The indictment goes after Konstantin Malofeyev, founder of a Russian Orthodox news channel Tsargrad TV. Malofeyev has called the invasion of Ukraine as a ‘holy war’ and backed separatist groups in Ukraine. 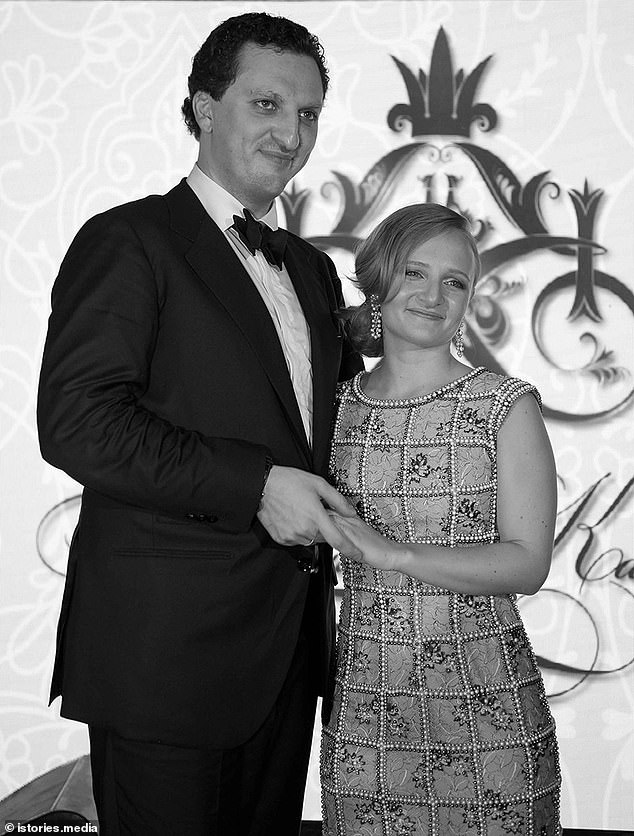 Tikhonova is was married to billionaire Kirill Shamalov, who Reuters reported was a senior shareholder in Bank Rossiya. They divorced in 2018 and he has fled Russian sanctions to Dubai where he is staying with the daughter of an FSB general 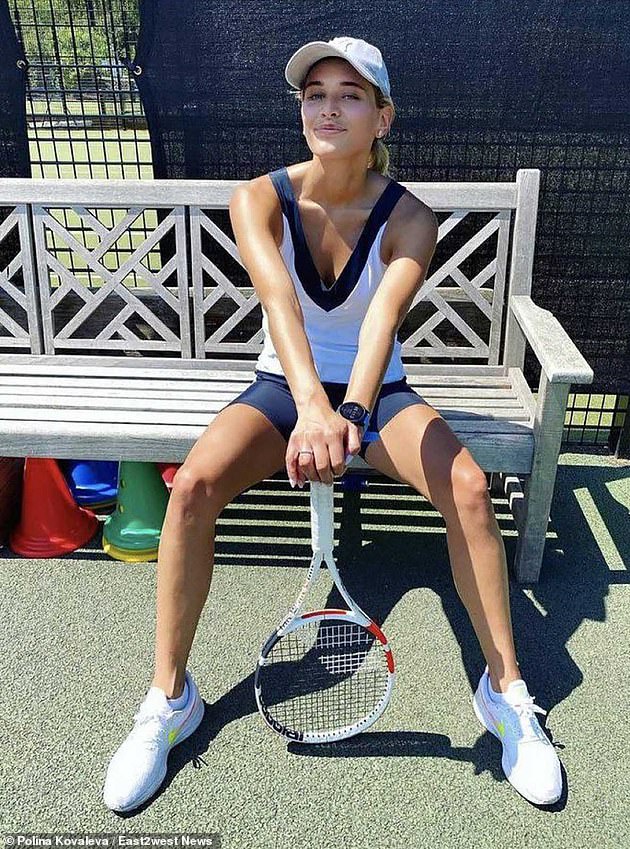 The sanctions hit Lavrov’s wife and daughter, but it was not immediately clear if they hit Sergei Lavrov’s ‘step-daughter’ Polina Kovaleva, who owns a $5 million luxury apartment in London 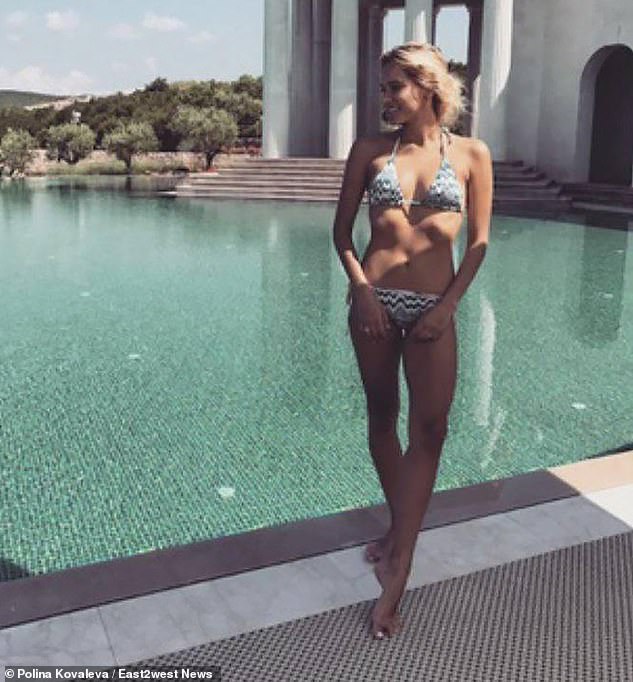 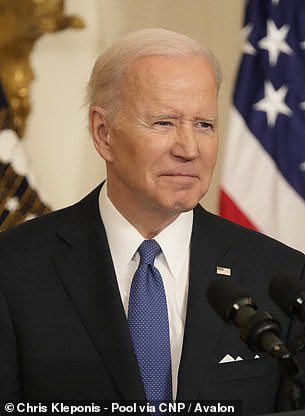 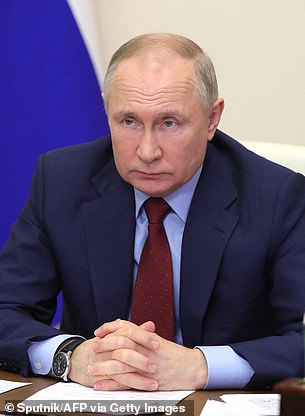 President Joe Biden has called Vladimir Putin a ‘war criminal’, a ‘thug’ and said he should be tried for war crimes in a series of statements since the start of the invasion