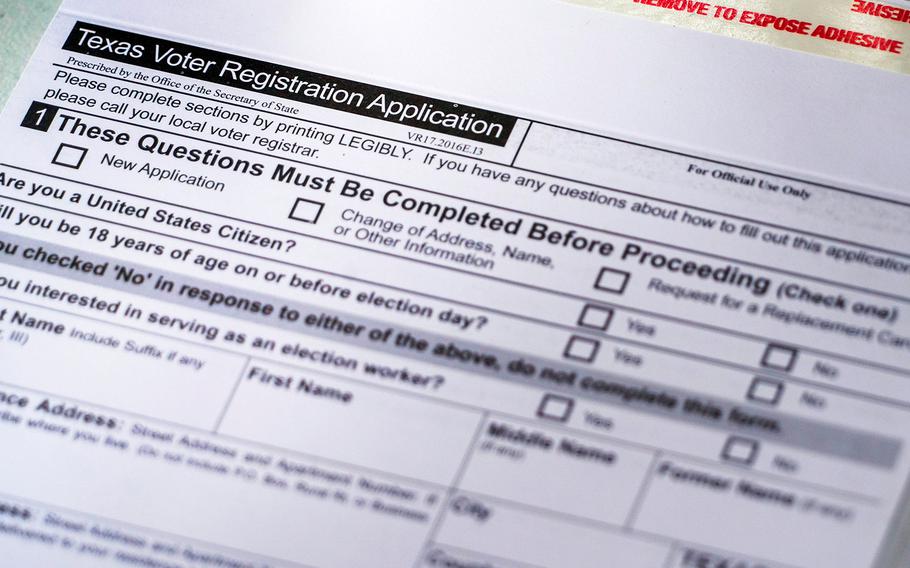 WASHINGTON (Tribune News Service) — Veterans will be able to register to vote when they receive medical treatment. Job seekers may be able to do the same at federally funded employment centers. And local housing agencies may offer voter registration help to millions of Americans living in public housing.

All of those steps are being taken under President Joe Biden’s plan to expand voting access amid a string of new state-level restrictions. The White House announced on Tuesday the first batch of actions that federal agencies will undertake after Biden’s executive order instructed them to draft plans to boost voter registration and participation rates.

Federal agencies submitted plans to the White House last week under the order’s deadline, and more actions could come in the future.

The Department of Veterans Affairs and Indian Health Service will offer voter registration services to patients who rely on the agencies for medical treatment, according to a White House fact sheet. The VA will also help homebound veterans in registering to vote and casting their ballots.

“Everything you see here is a commitment. It either has happened or will happen,” a White House official told McClatchy, referring to the fact sheet.

Most of the plans center on providing people who interact with the agency access to forms or information on voter registration. The fact sheet does not specify a timeline for each agency’s implementation.

The Treasury Department will add information to direct deposit campaigns for Social Security and other federal benefits, while the U.S. Department of Agriculture’s rural development offices will provide voter registration forms and information on location and dates for voting to those who visit their offices for housing and business assistance.

The Department of Housing and Urban Development will issue a guidance for local public housing authorities to provide nonpartisan voter registration services that will go out to 3,000 local agencies that oversee 1.2 million housing units nationwide.

“The hope is we will see millions of eligible Americans getting more information about how they can participate and we certainly hope that translates to more participation,” the White House official said. “The point here is to expand opportunity.”

The administration publicly released the plans on National Voter Registration Day when civic organizations around the country highlight the importance of registering to vote.

“Our nation and democracy are stronger when everyone participates, and weaker when anyone is left out. As we celebrate National Voter Registration Day, we must continue the work of protecting the fundamental right to vote,” Vice President Kamala Harris said in a statement. “The President and I continue to use all the tools available to us to help advance that right.”

Voting rights advocates are hopeful that the administration’s actions will help close gaps in voter registration rates along racial and economic lines.

“Black and brown Americans are significantly less likely to be registered to vote, and many have several contacts with federal agencies and programs,” Laura Williamson, senior policy analyst at Demos, a progressive think tank, told McClatchy last week.

“Having seen millions of voter registration applications submitted after the enactment of similar measures at the state level, we’re hopeful that we’ll see an even greater impact with federal agencies actively working to get more people registered,” she said.

Biden’s order explicitly set a goal to increase the rate of voter registration among Native Americans as roughly one-third of eligible voters in that community aren’t registered.

The Labor Department will issue a guidance to states asking that 2,400 American Job Center offices, which provide employment services and training in every state, are made into voter registration agencies under the NVRA.

The Department of Transportation will encourage local bus, subway and other transportation systems to offer reduced fares on Election Day and to provide voter registration materials in high transit stations.

The White House would not immediately comment on whether implementing those plans will require additional financial resources.

The American Civil Liberties Union and other voting rights organizations have recommended to the Biden administration that it enable people to register to vote when they apply for federal student financial aid or sign up for health insurance on Healthcare.gov. Those proposals were not included in the plans announced on Tuesday.

The White House official said that the plans represent the first set of actions, but declined to say what additional actions could be taken in the future.

The White House also wants Congress to pass voting rights legislation. But various legislative proposals, including ones endorsed by Biden, face a difficult path in the evenly divided Senate.