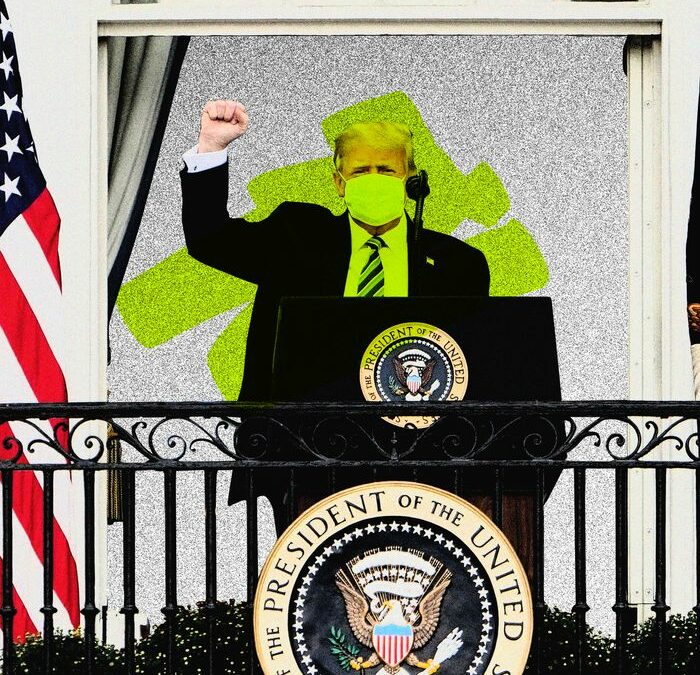 October 2021 has not, so far, been an uneventful month. Extremely high-stakes, if opaque, negotiations continue in Washington over a massive infrastructure bill and Democrats’ massive social-spending bill. COVID continues to wreak havoc. And then there’s the rise of the espresso martini.

But all this is small potatoes compared to what was going down a year ago. Any October before an election is frenzied, but 2020 had two unusual factors going for it in the newsworthiness sweepstakes: a pre-vaccine global pandemic and Donald J. Trump. Let’s travel back in time to the not-so-distant past and revisit the five craziest news items in a disorientingly eventful month.

The news was both shocking and completely unsurprising. On October 2, shortly after Trump adviser Hope Hicks announced that she had COVID, the White House announced that president and the First Lady had both tested positive as well. Given the president’s notoriously laissez-faire approach to the virus, perhaps it was only a matter of time. (A late September event, held to celebrate Amy Coney Barrett’s nomination to the Supreme Court, for example, had flouted COVID-prevention protocols.)

Information from official channels was not exactly reliable during the Trump era, and speculation ran rampant about the president’s actual condition. This only intensified when Trump checked into the hospital, supposedly as a precautionary measure. His personal physician, Sean Conley, offered a misleading timeline of Trump’s illness as well as a sunny prognosis, which he later said was meant to “reflect the upbeat attitude” of the White House. The president’s chief of staff, Mark Meadows, told a different, more dire off-the-record story to reporters (“The last 24 hours were very concerning and the next 48 hours will be critical in terms of his care”), the contours of which were confirmed months later.

But Trump, projecting his usual confidence and bluster throughout the whole affair, wasn’t down and out for long. And his three-day stint at Walter Reed Medical Center did not seem to temper his reckless attitude toward the virus. He briefly left the grounds to take a joyride for the benefit of his supporters assembled outside — possibly exposing some unlucky Secret Service agents to COVID in the process. And when he returned to the White House, he defiantly ripped off his mask before walking inside.

The Virus Spreads Through the White House

Perhaps the Amy Coney Barrett celebration was, in fact, a superspreader event, or maybe a general atmosphere of COVID nonchalance was to blame. Either way, COVID began spreading through more and more people in Trump’s orbit. The list kept expanding throughout October, encompassing press secretary Kayleigh McEnany, adviser Steven Miller, adviser Kellyanne Conway, multiple senators, and many others. It appears that nobody connected to this high-profile outbreak died, thankfully, though Crede Bailey, director of the White House security office, was hospitalized with a severe case of COVID and had to have part of his leg amputated. (Bailey had already contracted the virus before the Barrett event.)

As the virus continued to spread among Trump’s associates, concerns mounted about the last two presidential debates. The first one took place on September 29, just two days before Trump announced that he had COVID. The second one, scheduled for October 15, was canceled after Trump balked at a plan to make it a virtual event rather than in-person. At the time, Trump was fresh out of the hospital and the White House had failed to share basic information about his recent COVID tests, beyond the president’s insisting he was no longer “contagious at all.”

The undercard, a vice-presidential debate between Senator Kamala Harris and Vice-President Mike Pence, went on as scheduled. In response to all the ambient COVID concerns, the Commission on Presidential Debates came up with a less-than-brilliant solution: plexiglass shields between the candidates. It was widely derided as a meaningless intervention, considering that COVID is not known to have much difficulty getting around a mere partition.

The shields were a minor distraction. But in the end, the debate was mostly remembered for a fly that landed on Mike Pence’s head for two minutes.

About five weeks after Justice Ruth Bader Ginsburg’s death, President Trump’s nominee to replace her — close to the polar opposite of RBG in political ideology — was confirmed on October 26 by a sharply divided Senate, 52-48. All Democrats voted no; Maine’s Susan Collins, who was facing a tough reelection battle, was the only Republican who joined them.

With Republicans controlling the Senate, the dream of a hard-right Supreme Court within reach, and no personal scandal tarnishing Barrett (unlike Brett Kavanaugh two years earlier), the outcome of the hearings was never in doubt. Still, considering the ultrahigh stakes, there was a notable lack of outrage on the Democratic side throughout the proceedings, though Senate Judiciary Committee Democrats did boycott the final vote. The most lasting image of the hearings may be Dianne Feinstein, the committee’s ranking Democrat, embracing chairman Lindsey Graham, after complimenting him on “one of the best sets of hearings that I’ve participated in.”

With Trump down badly in the polls, he needed something — anything —to turn the tide. Enter Rudy Giuliani, who claimed to possess a Hunter Biden bombshell.

Giuliani acquired a cache of emails purportedly sent by Hunter years earlier; they appeared to show that Joe Biden’s second son had introduced his father to a businessman at the Ukrainian energy firm Burisma — which Hunter was then on the board of — and that he traded on family connections to conduct a business deal in China. The emails were hyped by conservatives as a smoking gun, supposedly proving that Joe Biden had squashed an investigation into Burisma. In reality, they showed nothing of the sort; they merely confirmed that Biden’s second son had an unsavory habit of trading on his family name to further his own business career.

In any case, the actual content of the messages immediately took a back seat to their provenance. A Delaware computer repairman claimed that Hunter had brought in the laptop for repair in 2019 and never picked it up — a story that struck many as more than a little fishy. It spurred accusations of a Russian disinformation plot and even claims that the emails themselves could have been fake. (No evidence has emerged on either front, and at least two of the messages have been independently verified as real.)

The story descended into even more farcical territory when Facebook and Twitter, dented by accusations that they let disinformation flourish in 2016, made the dubious decision to limit the reach of a New York Post piece on the subject.

Four years earlier, simply the word “emails” was enough to help sink Hillary Clinton’s campaign. But even though Trump made his best effort to pull the same trick again, pressing the Hunter issue repeatedly at the month’s final presidential debate, it never really broke through.

Daily news about the politics, business, and technology shaping our world.


By submitting your email, you agree to our Terms and Privacy Notice and to receive email correspondence from us.