ICEYE image of Mosul dam, showing changes in activity on the ground. (Provided to Breaking Defense by ICEYE)

GEOINT 2021: While it might be too far a stretch to say that the Intelligence Community is now embracing foreign-owned commercial remote sensing providers, there definitely is a shift underway in the willingness to acquire and use imagery produced by non-US satellite operators.

The reason? A study done in the spring by the National Geospatial-Intelligence Agency (NGA), in the form of mock Olympic Games for remote sensing providers, twigged leaders to the fact that in a number of key sensor technologies, non-US firms are at the head of the pack.

“As a community, we’ve begun to realize that there’s a better way,” Dave Gauthier, director of the National Geospatial-Intelligence Agency’s (NGA) Commercial and Business Operations unit, told Breaking Defense on Thursday. Speaking after his presentation to the annual GEOINT Symposium here in St. Louis, he noted that this happening across the membership if the IC’s Commercial Space Council — including the National Reconnaissance Office (NRO).

NRO in its new Broad Agency Announcement (BAA) Framework for Strategic Commercial Enhancements is allowing foreign owned firms with vetted US subsidiaries to compete for contracts involving new sensor tech, a change from its June draft request for proposals on electro-optical imagery.

Jeremy Banik, deputy director of NRO’s Commercial Systems Program Office, told the GEOINT symposium on Thursday that NRO was accepting foreign-owned, and foreign-controlled US companies under the BAA “as long as these companies are domiciled at a principal place of business in the United States, and their ownership and control does not present an unacceptable security risk.”

The change in attitude, if not formal policy, has been driven by a study by NGA in response to a National Security Council request for data on foreign competition in the global remote sensing market. NGA put together a “Commercial Imaging Olympics” in the spring, with Gauthier’s shop coming up with nine technical performance parameters by which to judge industry performance. These included the resolution of several types of sensors, the best video capabilities, and most frequent target revisit times. Companies then were awarded gold, silver and bronze “medals” based on their capabilities in each category. 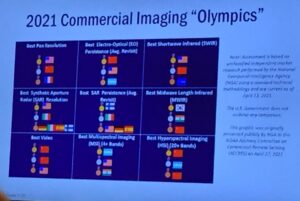 And while many policy-makers assumed that US companies would be industry leaders across the board, US firms won “gold” in only three of the categories. This included San Francisco startup Capella Space,  which took first place for best SAR resolution, Gauthier said in his GEOINT presentation. Maxar Technologies, with its Worldview 3 constellation, won for best electro-optical sensor resolution.

Chinese firms also placed first in three categories, with Gauthier noting that one of the insights that jumped out was how quickly Chinese firms have become competitive in the global marketplace.

“One of the other things that was surprising to us is just how fast China is proliferating their orbiting EO constellations,” he told the symposium. The Chinese satellites have high-quality video systems, he explained, as well as high revisit rates. “Most people were not really paying attention that this had happened.”

And in other surprises, Gauthier said, Finnish startup ICEYE, the first commercial firm to launch a synthetic aperture radar (SAR) satellite in 2018, came first in SAR-sat revisit time; and Argentina’s Satellogic, which has a constellation of 17 birds in orbit, won “gold” in multispectral imaging.

Driving IC Support For US Firms

The study, which Gauthier explained was undertaken using hard data although there were some internal IC disagreements about judging methodologies, also is part of the impetus for the IC’s renewed focus on supporting US remote sensing firms with contracts for data, imagery and analytics. While the IC community was generally aware that US firms weren’t always in the lead, the “Olympics” results are practically stupefying senior policy-makers, he said.

“When we show these slides to policy-makers, they have a different reaction, and it usually goes like this: ‘When did this happen? How did this happen? What are we doing about this?’” he said, mimicking a shocked face.

National security leadership also is pressing the IC to answer the “hardest questions,” Gauthier added. These include: “Are there policies that we can change to make it more competitive for our country’s and our community’s commercial systems to keep their edge in this global competitive race?” Therefore, he said, the issue of how best to support and promote the US remote sensing industry now is firmly on the table for the IC Commercial Space Council.

Indeed, the shift in the emphasis on using commercial remote sensing products when at all possible has been notable in the speeches of IC leaders here this past week.

“It is now a matter of policy, to consider commercial imagery first,” Deputy Director of National Intelligence Stacey Dixon told the GEOINT symposium audience on Wednesday. “This trajectory is set to accelerate.”