Organized Influence to Transfer and Control the White House

PartyGate is a “Den of Collusion” that defies any individual foundation. It centers on the fundamentals of a distributed effort by the many components necessary to carry out a legal coup on the White House, Congress and the American People. Similar to how of Johnny Torrio (Al Capone’s predecessor) in the 1920s organized many small gangs to operate in coordination as one large organization (of crime). 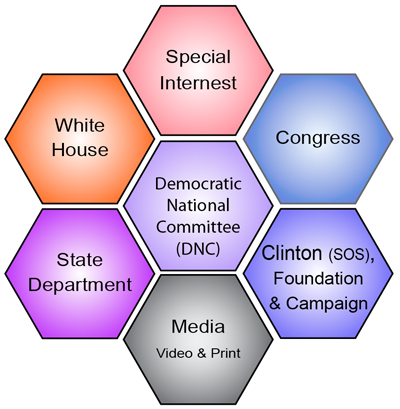 By any other definition that may be applied in the private sector, the collective of participants today must be considered a Political Racketeering Influenced and Corrupt Organization (PRICO). A Distributed Network of Collective Participants Organized to Influence Public Perception for the Express Purpose of Controlling which Candidate is elected.

Documentation dating back to 2008 show Political Reporting activities and content publish by Media have been intentionally blurred to influence voter knowledge by misrepresenting factual details. In the overall picture, Media “collectively including several hundred Media Organizations, Personalities and Journalist who secretly collaborated to benefit the Obama Campaign” provided the key communication mechanisms. Since the 2008 Election, several Political Organizations, Public Offices, Personnel and Media have been identified as participants who shaped and delivered false messages that misinformed and misdirected American Voters from more factual content regarding Political/Legislative activities.

The participants and tactics demonstrating Organized Efforts appear to be centered around the Democratic National Committee (DNC) and Special Interest. It immediately extended to the White House (President Obama), the State Department, Hillary Clinton as Secretary of State, the Clinton Foundation and several hundred Media Interest.

Some in Congress are and have been calculated participants while others are simply drawn into the frey by instinct. But party loyalty doesn’t excuse “absence of action” in the face of the misrepresentations that have been pulled over the American Voter’s eyes – making even the unwitting culpable participants. Including those who currently refuse to participate in correcting ObamaCare, Immigration or National Security.

Handing the White House to Hilary Clinton in 2016 appears to be rooted in DNC objectives of preserving President Obama’s White House during the 2012 Presidential Election – amid negative events, activities and political propaganda. ObamaCare, the only legislative objective of a Single Party Congressional Rule during President Obama’s first term had a questionable foundation. In contrast to Media Reports, “ObamaCare and billions of insurance industry subsidies were on the line.”

Politically speaking, Obama’s 2012 Presidential Campaign was already on fragile ground! And, America was tired of “Executive Orders that bypassed Congress”, “Leading from Behind” and “Open Border Policies” that literally allowed Illegal Aliens and Refugees to walk into our country and collect taxpayer funded welfare benefits while being protection from Federal Laws in sanctuary cities. The People voiced these concerns during the 2010 Congressional Elections.

Then, just 56 days until Election Day, September 11, 2012 anniversary of the 2001 terrorist attacks on innocent Americans in New York and the Pentagon, four more Americans were killed by terrorist in the Benghazi attack. The White House and State Department told American Voters the Benghazi attack was a demonstration related to an older internet video.

Through documents disclosed since the 2012 Presidential Election subsequent to many Court actions and decisions, we’ve discovered the imminence of this terrorist attack was known as early as March of 2012. Electronic mail revealed communications about Gaddafi’s son offering to assist in avoiding the attack. Inasmuch, the correspondence demonstrates the White House and State Department knew about the pending threat to America. Additional documents show the State Department refused and/or failed to provide adequate security – regardless of repeated request for the same.

Many of these documents are now public information and accessible on the internet. The transparency of Obama and Clinton fell far short of their campaign commitments. Both aggressively challenged disclosure requirements in Court after Court until one Judge finally said enough is enough.

The concealment and misrepresentation of terrorist attacks in Benghazi 56 days before a Presidential Election pales in comparison to what extents the DNC, White House, State Department, Obama, Clinton and Congress have gone to conceal the original lie.

In the end and to the extenuating efforts of some, the whole act of evasion and delay tactics regarding Benghazi led Congress and other Watchdog Interest to discover the Private Server and expose even more egregious activities of Secretary of State Hillary Clinton. Exposed to habitually misrepresent factual details is at the top of the list but not the Violations of Law and Public Trust – nor that of National Security!

It all seems to center on the DNC, a cozy relationship between Wealthy Donors and Foreign Interest through the Clinton Foundation, State Department and Personnel who were eventually hired by the Clinton Campaign – some after being publically disgraced.

Comey’s initial public announcement, comments regarding the FBI’s Investigation was a bag of “political talking points”, two (one for each Political side) for each violation of law. A few days later he succinctly confirmed those violations of law (and competencies) individually in a Congressional Hearing.

Comey failed to offer any justification or viable excuse for the FBI drawing a conclusion or making a public decision and recommendation (not to charge Hillary Clinton) in an instance where the decision is clearly in the hands of the Judicial Branch and a Grand Jury of American Citizens.

Loretta Lynch set up the whole “Clinton pass” story earlier by preemptively making a public announcement that she would accept the FBI’s recommendation. From a public perception, this allowed Lynch to sidestep any legal action (and culpability) as head of the Justice Department.

By design. this absence of action, delayed the inevitable that would have notably steered into and disrupt Hillary Clinton’s 2016 DNC Nomination and Presidential Campaign. Had Hillary Clinton won the election, it would have been impossibly to hold Hillary Clinton accountable or steer America back to a Washington that operates within the law and intent of The Constitution of these United States.

Despite disclosures, appearences and execution of duties, the DNC managed to lock in the nomination for Hillary Clinton long before the Primary Election. Document disclosures revealed how the Democratic National Committee colluded with the Clinton Campaign and several Big Media Outlets to favor a Hillary Clinton nomination!

Scandels involving the Office of DNC Chairman under Debbie Wasserman Schultz forced her departure.The DNC replacement was subsequently exposed for advancing “questions” to the Clinton Campaign prior to “Live Media Interviews”.