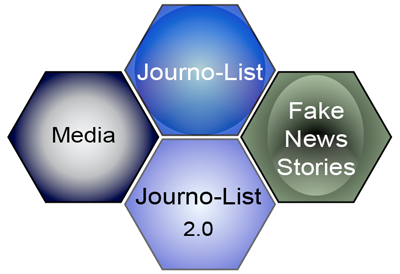 assured then President Obama would win a second term. With previous successes having gotten away with it following the 2008 and 2012 elections, Media pushed even greater boundaries in 2016 by advocating for a candidate (Hillary Clinton) documented to have gone so far as to violate Federal Laws and National Security Protocols.

The fact that a Politician or Special Interest will and should (legally) do everything they can to motivate a populous to stand behind their particular cause is no more alarming than marketers using advertisements to sell a product.

However, when and where seemingly diverse groups in vase numbers synchronize around a central Political effort and collude with widely distributed yet organized members of Competing Media Corporations to inaccurately shape, misrepresent and distract from factual truths using opinion and insinuation to mislead readers they risk becoming smaller pieces of a much larger syndicate intentionally performing acts as part of a broader criminal organization.

That was the case in 2008 when the wide reaching organized effort of diverse Media Reporters privately (through the JounoList ListServer) colluded to “discredit” Sarah Palin as soon as Candidate McCain announced her as his Vice Presidential selection.

The Daily Caller identifies how JournoList Members coordinated attacks on Sarah Palin. Daniel Levy at the Century Foundation (a progressive think tank) referred to the JournoList group as “Obama’s non-official campaign” noting they had “a big role to play in defining Palin, shaping the terms of the conversation and saying things that the official [Obama] campaign shouldn’t say“.

This was no isolated incident. In 2016, the public became aware that Media was the centerpiece of delivering “messages” professionally prepared by outside Organizations and Industries no closer to Media than President Trump. Media Reporters from a vast array of News Organizations colluded to frame news content that would “scare people“.

Stated in their own electronic words, many in Media knowingly made coordinated efforts to Influence the Outcome of Presidential Elections in the United States of America.

The “people” these reporters targeted were the American voter. In other words, the DNC, Clinton Campaign, news entities, editors and reporters made calculated and more often organized efforts to influence the American Voter, how and who Americans Voted for.

Such revelations puts a new light on President Trumps’ decisive willingness to bypass Media to assure American Citizens hear his words correctly. Something Obama and Clinton called “Transparency” yet put so much effort into coordinating with Media and concealing shady deals.

JournoList 1.0
JournoList (circa 2007-2010), a “by-invitation-only group” numbering over four hundred Political Reporters was the first known to use Internet technologies to organize, centralize and publish News Content based on a central effort to benefit a singular Political Party and Candidate (Obama).

JournoList was a Private Google Groups Forum comprised of over 400 “left-leaning” journalists, bloggers, political reporters, magazine writers, policy wonks and academics created by Ezra Klein who spent the first five years of the Obama Administration working for The Washington Post.

Dave Weigel, another Washington Post writer and JournoList Member (recommended by Klein) was eventually forced to resign from the Post in 2010 when emails emerged showing extremely vile comments about industry peer Matt Drudge at the New York Times. Somehow, Dave Weigel found his way back to the Washington Post in July of 2015, just in time to apply his vile views and Political Manipulation to the 2016 Rrimary Elections.

And, just because Ezra Klein took down the JournoList Group ListServer in 2010, didn’t mean the effort and collusion ended in 2010. In fact, we now know Hillary Clinton under President Obama told the biggest lie to America since Nixon when they claimed an internet video was responsible for the attack in Benghazi on the eve of the 9/11 New York attack less than two months before the 2012 Election. Harry Reid (D-NV), Senate Majority Leader later admited to lying about Mitt Romneys taxes – in another attempt to influence the 2012 Presidential Election.

These lies, the effort by Media to cover-up real facts combined with other tidbits got Barrack Hussein Obama elected in 2012 for a second term solidifying ObamaCare (ACA) and the American Governments’ takeover of the US Health Insurance Industry. Which long term could eventually lead to employees being taxed on the $12,000 to $36,000 in annual tax-free Health Insurance Cost/Benefits that are paid for by their employers.

That one lie, led to two more lies, which led to four more lies (and so on…) until eventually Hillary Clinton (then Secretary of State and forth in line for President) was exposed for concealing a Private email server used to conduct Federal Business… along with an entire encore of criminal activity.

However, it took nearly four years to get the information and clear enough details so the average news consumer could actually get a grip on the depths of the criminal investigations and conclusions crafted to deceive voters. These revelations came late and despite a generally favorable Media that attempted to distract from every little detail beginning with the Video.

The effort by Media extended well beyond legality and morality in they supported distractions that included FBI Director Comny with a Democrat/Republican talking points announcement in the summer of 2016 and a subsequent story by ABC that looked more like a list of excuses for criminal activity clearly defined in that final FBI announcement just month before the 2016 Presidential Election and days before Hillary Clinton was given the DNC Nomination over and in contrast to the popularity of Bernie Sanders.

JournoList 2.0
In August of 2014, MediaTrackers reported discovery of a new Google Group called “Gamechanger Salon” founded by another leftwing activist Billy Wimsatt. After conducting an analysis of the content, members, “types excluded” from membership, policies and the 2014/2015 calendar of supported events MediaTrackers appropriately dubbed it “JournoList 2.0”.

Established just in time for the 2016 Presidential Elections, the list of participants at Gamechanger Salon included over 1,000 influencial individuals with an expanded spectrum of members that include political leaders, special interest, activists, college professors and of course journalist to publish the groups propaganda.

Redstate, an affiliate of Salem Media Group, highlights how this Private ListServe Group continued the collusion between activist, special interest, politicians, campaigns and Media intent on controlling the narrative and manipulating Political News Content using everything from misdirection to misinformation.

One technique involved pushing a specific agenda by painting conservatives in a bad light to distract the public from more factual content. The light most News Consumers would likely see Democrat Politicians in, if the same Big Media Corporations did not cover up the dirt by pointing fingers at Republicans.

Members in the area of Activist and Special Interest Groups range from the AFL-CIO and ACLU to the United Nations: World Food Programme (WFP) including:

There were over 1,400 participants in just these two Organized Groups of Political Reporters and Special Interest we know about. In contrast to a lot of facts about private servers, a fake video, changing excuses, Congressional misrepresentations and evasion, the Clinton Foundation and acquisition of American Uranium assets by Candian and Russian interest, 57 of the top 100 News Publications supported Hillary Clinton. Only 1 News Publication supported Donald Trump while 26 remained silent or independent of Presidential Candidate support.

JournoList is just one of several “Media” elements participating at the Center of a Propaganda Communications Machine Democrats have been cultivating in what should be considered Political RICO (Racketeering Influenced & Corrupt Organization). An audacious coordinated effort to gain and maintain control of the White House. Other participants can be found in links between Media and the DNC, Clinton Campaign and Special Interest will be connected through the DNA Links contributors are developing to provide a conceptual view of the corruption involved.

In 2008, “JournoList” participants shared talking points about how to shape coverage to help Obama.

They tried to paint any negative coverage of Obama’s racist and hateful pastor, Jeremiah Wright, as out of bounds.

“That’s excellent! If enough people – people on this list? – write that the pick is sexist, you’ll have the networks debating it for days. And that negates the SINGLE thing Palin brings to the ticket”